A poem I built with the first and last word of every chapter in one of my unpublished manuscripts. The words are in bold and are in order. anything in brackets--[]--I added to the "found" words. Punctuation was also added.

I Time my heartbeats
The Grandparents can't hear
My Field of vision narrows
Run Metal to the edge of the wall
My Dad is still gone
Xavier All over again
An Ugh escapes my lips
Total Out the final score
Quiet Back[s] into my soul
It[s] Luxury wraps around me
It Started.
M[is]s You
The Thought
The... Anyway
100[%] All or nothing
The Ruffians laugh and point
Well Into the night
I Was alone
The Detention didn't matter
To Homework I turned for escape
Studying YA won't help me write MG
Someone This quiet will never know
Give It time
The More I think the more I want it
As Freedom is wanted
This Along the road, the path ahead.
I...
It will come.
I...
Trouble will come.
I Back into myself.
The Triumphantly sounding morning dawns
A Dismissed night fades away
The Go[ng] sounds.
Time to wake.
Posted by Krista 2 comments

If you have trouble leaving a comment you can email your feedback krista.snapdragon@gmail.com

Twelve year-old Xavier Howell has a knack for making things go awry on colossal scale. Other than that he's just an ordinary kid on an average outer world colony … as far as he knows.

Twelve year-old Xavier Howell has a knack for making things go awry on colossal scale. Like the time his beetle trap science fair project experiment turned into a minefield of exploding dung bombs. Other than that he's just an ordinary kid on an average outer world colony … at least as far as he knows.

Everything changes when a mysterious black spaceship shows up and fries the colony to a crisp (think "burnt pancake"). Then the puzzle box Xavier's mother gave him before she died opens and plays a holographic message. That's how Xavier learns about the microchip in his head that "The Man" will do anything to get his hands on.

With a band of eclectic sidekicks that includes a quirky professor, a robot with multiple personalities, and a girl super genius—Xavier must escape the Mysterious Black Spaceship, discover his own amazing talents, and solve his mother's riddles to unlock the microchip.

All while using is super impressive and not dorky at all ninja moves to dodge giant-man-eating-plant-thingys.

Xavier Howell and the Mysterious Black Spaceship is the first book in a humorous middle grade science fiction adventure series (in which many things explode including poo, goo, and airlocks) told in 40,000 of Xavier's uniquely eccentric words. It is peppered with tidbits I've picked up through my experience as a software engineer, science fiction and fantasy geek, and a book nerd.

Like Xavier I had to come to realize that the things I thought were my most dismal led to my greatest triumphs. We are all more than we think we are.

Thank you for your time and I hope to hear from you soon,

I thought to myself: Self, that’s not supposed to happen—just as the second dung bomb exploded. As the smelly, sticky, brownish-green substance flew through the air like shrapnel; I knew somewhere I'd made a slight miscalculation. Taking a moment as I crouched in one of the wheat fields that surrounded the colony on Kevin 5, I reviewed the parameters of my little experiment.

The traps consisted of plastic trays that held a chemical Mr. Finch, the colony's bug guy, assured me would be poisonous to the black bellied grain beetle. The trays were covered by a heap of cow dung to attract said beetles (again according to the illustrious Mr. Finch). Perhaps I should've consulted the colony chemist, too.

I cringed. I didn't recognize the voice, the colony was small but not that small, but its tone was certainly familiar. My reputation had preceded me. Turning around slowly, I came face to knees with one of the grain farmers. I couldn't remember the man’s name, but I might've been distracted by the fact that he was covered—from head to toe—in dung.

"Yes, sir?" Why does my voice always crack at times like these?

His angry reply was cut off by the fourth and final explosion. The trap I'd proudly dubbed ‘The Hotel’ went out in a blaze of glory, spewing forth a cloud of brown and a jet of yellow flames. The wave of brown speckles struck the farmer's back and then fell lightly on my face.
Posted by Krista 12 comments 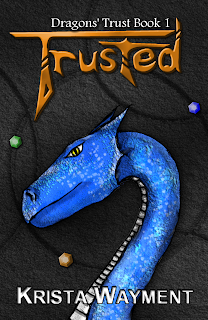 Trusted, the first Book in the Dragons' Trust series is now available on Amazon.com in both Paperback and Kindle Edition

- If you have a Kindle, and Amazon Prime you can borrow Trusted for free.
- If you purchase the paperback from Amazon, you can get the Kindle Edition for only $0.99.

To celebrate, there will be a Facebook launch party with some amazing prizes this afternoon.
Posted by Krista 2 comments